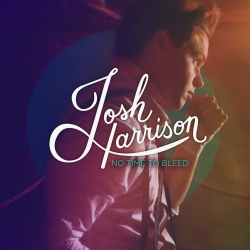 While listening to Josh Harrison’s  No Time To Bleed a toe tap is likely to turn into a foot stomp while an involuntary finger twitch may soon lead to a shoulder shimmy.  It’s difficult not to move along to the infectious debut  from the young Nashville singer-songwriter  who plainly displays his desire to make people slip on their dancing shoes in songs like the jazzy “Old Time Groovin’.”  With the assistance of talented collaborators (Brandon Ray, Dallas Wilson, and Lonnie Wilson) and backing musicians,  Harrison showcases his artistic potential by crafting an engaging album with cross-generational appeal.

No Time To Bleed melds classic and contemporary sounds in an album that owes as much to 50s and 60s rock and rhythm and blues as to current singer-songwriters. Fans of artists like Ben Rector and Nathan Angelo will find much to appreciate in Harrison, whose pop-soul compositions are buoyed by Lonnie Wilson’s crisp production.  No Time To Bleed bristles with attitude, ranging from the defiant strut of the title track (a prickly denunciation of detractors and pretenders) to the frantic wail of “Who Ya Calling Baby.”  Of particular note are the sublime horns throughout the album that lend a throwback vibe to several numbers, yet still maintain a feeling of youthful exuberance.

Vocally, Harrison sounds like a cross between Ryan Tedder and acclaimed Canadian musician Greg Sczebel. Exuding poise, he frequently sings of meeting life’s challenges headfirst, whether confronting critics or a potentially cheating mate. Having “no time to bleed” essentially amounts to dismissing negativity and pessimism.  Harrison realizes in songs like the bluesy “Free” that while he can’t control the circumstances that surround him, he can control his reactions. More often than not, he chooses to focus on the positive.

That quiet confidence also allows Harrison to exhibit vulnerability.  The tender “Nothing’s Gonna Change” finds him soothing a partner’s insecurities and offering reassurance that his love remains unmoved.  “Moving  On, ” an anguished, sparse piano ballad, chronicles a futile attempt to understand why a relationship has come to an end.   “Maybe there’s hope in the broken unknown/Maybe I’ll find a new love to call home/But that just don’t fix the way we’re leaving it,”  he confesses in one of the album’s highlights.

No Time To Bleed offers an encouraging glimpse of what listeners can  look forward to  in the future.  While Harrison’s previously been  known for his versions of other musicians’ songs, this solid debut should win over  new fans who will enjoy his original material as much as his covers. That’s certainly cause for dancing.

Purchase the album on Bandcamp (digital and physical copies) or  iTunes

One thought on “Album Recommendation: No Time To Bleed – Josh Harrison”