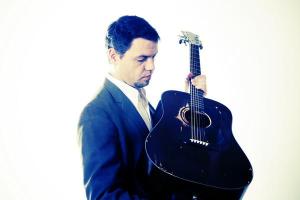 You can always depend on Stephen Simmons.  A decade after quitting his day job to pursue music full-time, the Tennessee native quietly maintains a steadfast presence in Americana music.  As a reliably strong songwriter, he frequently offers a soothing vocal caress to a skittish audience that may find its attention pulled in other directions.  In a hyperactive world, he displays solid calm and doesn’t veer from his artistic course. While some of his contemporaries in the county music world appear content to play man-child/ frat boy/outlaw caricatures, Simmons exudes uncompromising everyman appeal.

The characters he presents on his seventh studio album Hearsay are men who, in both their professional and romantic lives, are regular Joes in the best sense.  They do not lead easy, blemish-free existences, but their circumstances are treated with dignity.  They are aware of their own advantages and faults, neither Lotharios nor paragons of purity.   They seek comfort where they can find it: in  a kind pair of eyes, the concept of love, or the occasional exotic dancer.  Perhaps most importantly, they operate with their hearts and minds firmly open to consequence.

Consisting of  compositions that are meant to be savored instead of simply blasted from speakers,  Hearsay is an album that demands repeated listening in order to fully appreciate it.  Fans shouldn’t be afraid to set the record aside and come back to it later, allowing the warmth of Simmons’ words and vocals to envelop them. Chances are, the songs will be even better the second time around.