Earlier this year I posted about the Souvenirs, an intriguing country group that caught my attention with astute observations and shimmering harmonies.  An excerpt from the original entry read:

Formerly known as the Folka Dots and consisting of three-fifths of acclaimed Americana band the Hollering Pines, the Souvenirs’ sound is rooted in the group’s passion for classic country.   Originally conceived as a country cover band, the Souvenirs cut their teeth on Hank Williams and Patsy Cline songs before the members began to pen original material.  Today the Utah-based trio, featuring sisters Marie Bradshaw (vocals, guitar) and Kiki Sieger (vocals) and close friend Corinne Gentry (vocals, fiddle), makes maximum effect of its three-part harmonies and whip smart lyrics on original compositions like the poignant “Paper Bag” and “I’d Do It For You,” a sharp rumination on the caustic, tenuous  bond between a parent and now-grown child. 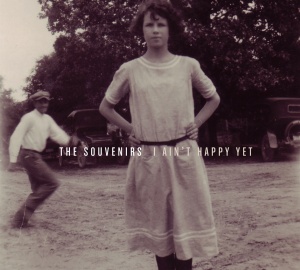 These past few months have been particularly busy for the Souvenirs. In addition to recording background vocals for singer-songwriters Ryan Tanner and Jay William Henderson, who recently released their own albums,  Together is Where We Belong and Hymns To My Amnesia, respectively, the ladies have been preparing their debut album I Ain’t Happy Yet.

Scheduled for release on August 30th and produced by Tanner and Henderson, I Ain’t Happy Yet consists of thirteen original compositions and three covers (Bob Wills’ “Brain Cloudy Blues”, Jim Lauderdale’s “Are You Having Second Thoughts?”, and the Merle Kilgore-June Carter-penned, Johnny Cash-popularized “Ring of Fire”) that were recorded live over a three day period this past April at the Sound Emporium in Nashville.

The album can be ordered on iTunes, Amazon, and Bandcamp.

Stream the album by listening to the widget below.

Favorites From The Past