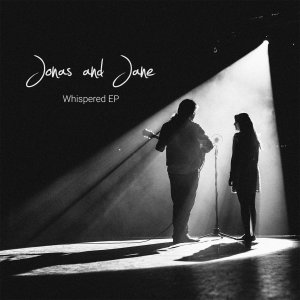 Occasionally when I’m listening to albums I engage in some rather unfortunate (read: embarrassing) behavior. If I particularly like a song, I clap at the end of it, as if I’m at a concert. Recently, I found myself doing that as I listened to Jonas and Jane’s superb Whispered EP, their second release of 2015, following a self-titled EP that debuted in January.

Not familiar with Jonas and Jane? No worries. They’re a fairly new duo; in fact they’ve been together for less than two years. That said, they’ve already amassed a fairly impressive list of appearances at major festivals and some key endorsements. Once you hear them, it’s not hard to see why.

Although they call Surrey, England home, Jonas and Jane are clearly well-versed in their knowledge of American singers and songwriters. Specifically, they cite the Everly Brothers, the Eagles, and the Civil Wars as influences. However, my first thought upon hearing Whispered was that the duo’s sound was reminiscent of James Taylor (take a listen to the first track on the EP “The Traveling Kind” below – the similarity is uncanny). Additionally,  Jonas and Jane also display their appreciation of Appalachian music on Whispered.

Jonas and Jane, who impressively play all of the instruments on the Whispered EP, have an understated and timeless sound, a reflective concoction of folk, country and bluegrass. Their songs are rootsy yet relatable to multiple generations, featuring contemplative lyrics and seemingly effortless harmonies. (Of course, that’s generally a clue about just how hard the duo must actually work to achieve that kind of blend.) The pair’s producer Oli Silk  keeps the emphasis on Jonas and Jane’s vocals while supplementing their delivery with the right amount of instrumentation.

Among all the new promising acts emerging in the Americana scene, Jonas and Jane manage to sound cozily familiar, yet stand out at the same time.