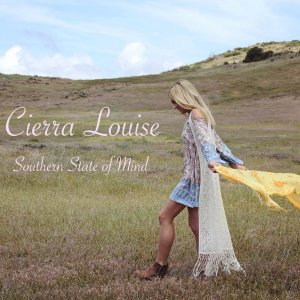 Why would a daughter of Southern California gravitate toward the bright lights of Nashville and the plaintive wail of steel guitar?

It’s a question that may cross listeners’ minds as they delve into the expressive compositions on San Diego-born singer-songwriter Cierra Louise’s debut EP Southern State of Mind.  The answer is scattered among the album’s melodies and lyrics, which focus on the development of identity and character through the universal situations Cierra Louise depicts in the five song set.  Identity, of course, is not predetermined by background; it is also formed by the experiences people claim for themselves. Character is not only shaped by one’s actions, but by interactions with others. To an extent, Southern State of Mind is a record about finding oneself, but it also explores the potential emotional toll of embracing culture, people and relationships.

Perhaps what attracts Cierra Louise to country music is admiration for the genre’s emphasis on the importance of narrative. Make no mistake: Cierra Louise is a skilled storyteller who utilizes impactful imagery to craft memorable tunes. Undoubtedly, she’ll only get better as she continues to grow as an artist.

Southern State of Mind balances elements of traditional country with rock and pop. Producer, co-writer and duet partner Sean Trainor surrounds Cierra Louise with instrumentation (provided by Mark Deschner, Ryan Madora, Tom Myers, and Trainor) that is alternately lush and restrained, keeping the focus on her affecting vocal performances. Listeners shouldn’t be surprised to find themselves drawn in by the young artist’s confessional tone and impassioned phrasing which she uses to give voice to narrators who are spirited and sensitive.

Not coincidentally, the EP is bookended by two numbers directly referencing habits and language associated with the South. The jaunty title track chronicles the tale of a young musician chasing her dreams in Music City (advised by her mother to “make [her] way to Broadway lights/with the neon nights/with that guitar-pickin’ kickin’ in”) and adopting the customs of both life on the road and her new place of residence. Opening track “Bless Your Heart”, on the other hand, details the cool wrath of a woman scorned who knows she’s about to witness the inevitable comeuppance of her cheating ex’s new lover. “I’ve done my heartbreak/Done my crime/I went to hell and did my time,” Cierra Louise reflects before warning “Another one of you is gonna take him away.” The song’s swampy groove and layered vocals conjure up images of an old-fashioned revival. Both songs, however, speak of the narrators’ discovered strength and ability to adapt to new, sometimes uncertain situations.

Striking ballad “On the Other Side of the Bed” also tackles the aftermath of cheating, albeit in a more poignant manner. The narrator’s feelings of yearning and anguish certainly ring true. Cierra Louise’s sympathetic portrayal of a woman still coming to terms with the loss of her love showcases both the artist’s eye for detail and the power that can be found in her tender performance. But while giving away one’s heart can sometimes have unintended consequences, Cierra Louise also acknowledges the positive changes that can result from a relationship, such as the growing maturity of the protagonists in the duet “I’ll Fall For You.”

The songs on Southern State of Mind speak to the reason why country music boasts fans around the globe. Regardless of one’s hometown, anyone can appreciate the honesty of well-constructed songs that are reflective of the moments, trials, and dreams that help define people’s lives. With her debut EP, Cierra Louise continues that tradition while beginning to develop her own unique voice.